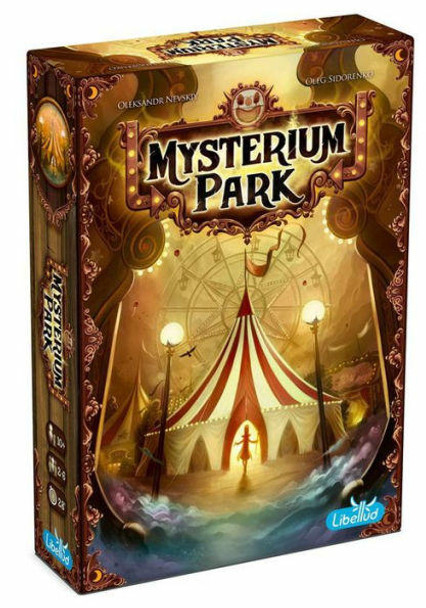 Welcome to Mysterium Park! Its cotton candies, its circus and its dark secrets... The former director disappeared, but the investigation came to nothing. Since that night, weird things have happened at the fair. As psychics, players are convinced that a ghost haunts this carnival. They’re now intent on giving it a chance to reveal the truth. In this asymmetrical game, the ghost sends visions with illustrated cards. The psychics try to interpret them to exonerate the safe suspects and locations and, finally, seize the only chance to understand what happened a few years ago. Players have six enjoyable nights before the carnival leaves. They must open their minds and find the truth!

For Ages: 10+
WARNING: Choking Hazard; Small Parts. Not for children under 3 years old.

Sale: $49.95
Retail: $59.99
This comprehensive 640-page guide to the Pathfinder roleplaying game provides everything you need to set out on a world of limitless fantasy adventure! Choose from ancestries like elf, human, and...

Sale: $14.99
Retail:
In Infinity Gauntlet: A Love Letter Game, one player takes on the role of Thanos, seeking the Infinity Stones to bend the universe to his whims. One to five opposing players assemble heroes to stop...

Sale: $19.95
Retail:
In the second dragon age of darkness, the people of Aqedia are making their very last stand against a new wave of dragons who terrorize the villages across the five great kingdoms of men. Brave...

Sale: $24.95
Retail:
Munchkin sees three to six players competing to grab the most loot and defeat the most monsters. Throughout the game, players take turns to ‘kick down the door’ in order to challenge...

Sale: $24.99
Retail:
MUNCHKIN®: Disney Players will find their favorite characters from the across the Disney universe in this magical edition of Munchkin. Villains and unexpected pitfalls await in this role-playing...

Sale: $24.99
Retail:
There’s gold in the Black Hills of South Dakota, and you’ve come to find (or steal) your share. You’re staying at one of the three major establishments in Deadwood where you and...

Sale: $27.95
Retail: $29.99
This comprehensive 640-page guide to the Pathfinder roleplaying game provides everything you need to set out on a world of limitless fantasy adventure! Choose from ancestries like elf, human, and...

Sale: $39.95
Retail: $49.99
Unleash the BeastsOver 400 of fantasy's fiercest foes burst from the pages of this enormous compendium of the most popular and commonly encountered creatures in the world ofPathfinder! From familiar...

Sale: $12.50
Retail: $24.99
Delve into dungeons with this kit for the world’s greatest roleplaying game Delve into the Dungeons’ Depths This kit equips the Dungeon Master® with a screen and other tools...

Dungeons & Dragons The Wild Beyond the Witchlight: A Feywild Adventure

Sale: $25.00
Retail: $49.95
A wickedly whimsical adventure for the world’s greatest roleplaying game.Once every eight years, the fantastic Witchlight Carnival touches down on your world, bringing joy to one settlement...