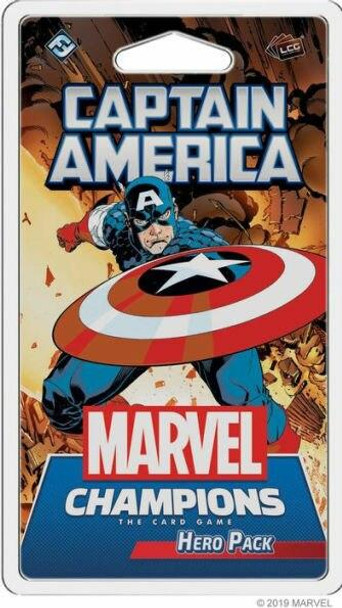 When Steve Rogers was deemed too frail to enlist during World War II, he took part in a secret government program to transform him into the world’s first Super-Soldier. With the help of a revolutionary serum, Rogers emerged from the experiment as the embodiment of physical perfection. Now in peak condition, Rogers served as a special operative and a bastion of freedom in World War II until an accident near the end of the war submerged him in ice for decades. Discovered by the Avengers in the modern era, Captain America continues to fight for the American Dream. A man out of time, but never out of courage.

With his iconic shield made of pure vibranium, Captain America can lead the charge against even the most fearsome of foes, inspiring those around him with legendary valor.

Like all Hero Packs, the Captain America Hero Pack includes a fully-playable deck right out of the box that includes 15 Hero cards, 17 cards from the Leadership aspect, and 8 basic cards. Additionally, look for Captain America’s signature obligation and nemesis set, and three copies of one new card for each of the other aspects! This deck brings Captain America to the forefront of the action with his trusty shield, as he assists the heroes around him while calling on new Avengers to join the fight!

Sale: $12.95
Retail: $14.95
Saturated by deadly gamma rays while saving his best friend from the detonation of an experimental bomb, the genius Dr. Bruce Banner has transformed into the towering, muscle-bound Hulk. Though...

Sale: $12.95
Retail: $14.95
Already struggling with who she was, and who she wanted to be, teenager Kamala Khan just wanted a simple life. But when she became trapped in a Terrigen Mist enveloping New Jersey, Kamala’s...

Sale: $12.95
Retail: $14.95
Join the fight for freedom with the Thor Hero Pack for Marvel Champions: The Card Game! With the mythical hammer Mjolnir, Thor has the power to defeat even the strongest of foes with legendary...