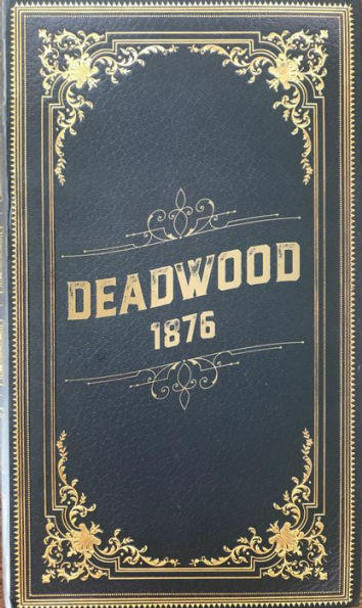 There’s gold in the Black Hills of South Dakota, and you’ve come to find (or steal) your share. You’re staying at one of the three major establishments in Deadwood where you and your associates are working together to steal some of the gold-filled safes floating around town. But you suspect that the “friends” you’re working with are secretly plotting to keep all the gold for themselves. Will you be ready to turn on them before they shoot you in the back?

In Deadwood 1876, you use cards from your hand to try to win Safes from other players. Safes contain Badges, Gold, or Showdown Guns. Near the end of the game, players with Badges get extra turns. After the final turn, the team with the most Gold will advance to the Final Showdown. There, teammates will have to fight each other to the death using Showdown Guns. The last person alive is the winner!

The game is a balance between teamwork and selfishness. If a player uses all of their best cards to hunt down Gold for their team, they’ll be defenseless to fight against their teammates if they go to the Final Showdown. But if a player only goes after Guns and saves all of their best cards, their team might not have enough Gold to actually reach the Final Showdown. If someone on your team doesn’t seem to be pulling their weight, they might be plotting to steal your gold after using you to get to the Finals! There may come a point where you need to gather Showdown Guns instead of Gold, or attack, mislead, frame, abandon, or banish your own teammates.

Sale: $14.99
Retail:
In Infinity Gauntlet: A Love Letter Game, one player takes on the role of Thanos, seeking the Infinity Stones to bend the universe to his whims. One to five opposing players assemble heroes to stop...

Sale: $19.95
Retail:
In the second dragon age of darkness, the people of Aqedia are making their very last stand against a new wave of dragons who terrorize the villages across the five great kingdoms of men. Brave...

Sale: $24.95
Retail:
Munchkin sees three to six players competing to grab the most loot and defeat the most monsters. Throughout the game, players take turns to ‘kick down the door’ in order to challenge...

Sale: $24.99
Retail:
MUNCHKIN®: Disney Players will find their favorite characters from the across the Disney universe in this magical edition of Munchkin. Villains and unexpected pitfalls await in this role-playing...

Sale: $29.99
Retail:
Welcome to Mysterium Park! Its cotton candies, its circus and its dark secrets... The former director disappeared, but the investigation came to nothing. Since that night, weird things have happened...

Sale: $27.95
Retail: $29.99
This comprehensive 640-page guide to the Pathfinder roleplaying game provides everything you need to set out on a world of limitless fantasy adventure! Choose from ancestries like elf, human, and...

Sale: $49.95
Retail: $59.99
This comprehensive 640-page guide to the Pathfinder roleplaying game provides everything you need to set out on a world of limitless fantasy adventure! Choose from ancestries like elf, human, and...

Sale: $39.95
Retail: $49.99
Unleash the BeastsOver 400 of fantasy's fiercest foes burst from the pages of this enormous compendium of the most popular and commonly encountered creatures in the world ofPathfinder! From familiar...

Sale: $39.95
Retail: $49.95
Explore the horrors of Ravenloft in this campaign sourcebook for the world’s greatest roleplaying game.Terror stalks the nightmare realms of Ravenloft. No one knows this better than monster...